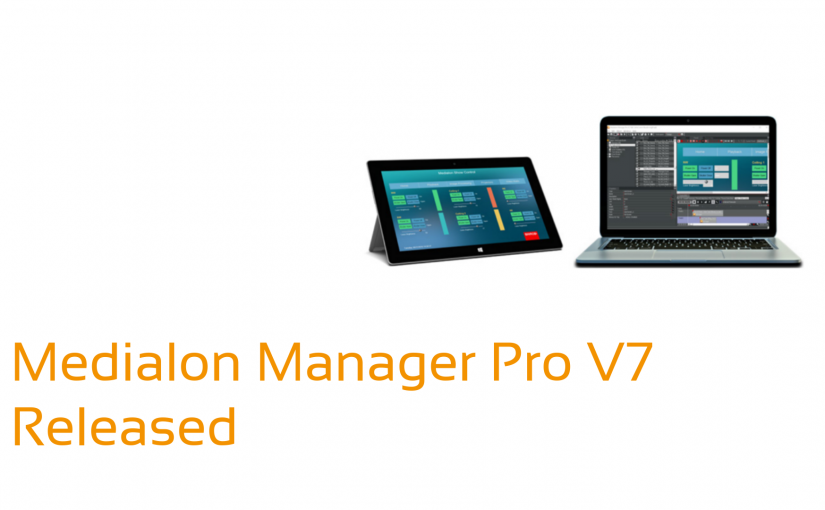 End users still benefit from the flexibility, reliable operation and advanced IT-friendly deployment options. Programmers benefit from streamlined project programming, eliminating the need to create Tasks to perform status updates on User Interfaces. The result is more concise programming that is faster to create, and easier to follow and maintain.

The feature improvements in Medialon Manager V7 are centred around making the show control programmer’s work more efficient, reducing programming times, and making it easier to follow the programming done by others.

A new feature addition that expands the richness of user interfaces is the inclusion of external web content within a container in custom-designed WebPanels. This allows content like video streams from cameras or built-in web interfaces from devices like projectors to be displayed inside the WebPanel user interface so both the direct device controls as well as the show control system’s controls are available on the same screen.

Medialon Manager’s Debug mode allows programming to be tested and adjusted while the project is running and communicating with devices. This greatly reduces programming time as sequences can be tried, adjusted, and tried again in seconds. The Positrack feature of timelines commands all devices controlled by the timeline to adjust to what they should be doing at any given position in the timeline, by simply jumping the playhead around. The workflow is like a non-linear video editor for all of your devices, including lighting, audio, video, and special effects.

Programming more in less time is what the new features of Medialon Manager V7 are all about. The new features allow show control programmers to complete the same task in less time, with more readable and maintainable project files, and provide tools for including existing device controls (such as device-served web pages) directly into the show control interface so advanced but rarely-used functions are accessible but don’t need to be programmed into the show control programming. The result is more efficient project code that takes less time to create and offers more flexibility, meaning programmers can get on to other projects faster.

If you have a passion for performance, come join us!

We're recruiting for a #Medialon Manager to join the 7thSense team.

Medialon Calendar eliminates the time required to build bespoke scheduling engines for each project, simplifies the scheduling experience for non-technical users, and is flexible to suit a variety of scheduling needs.

#MedialonMarquee is shortlisted in the Control & Management Technology of the Year category..

Good luck to all finalists - see you there!